A sustainable business proposition based on great science, imagination, creativity, and resilience – the next generation of life science entrepreneurs need all these attributes and more when it comes to navigating this tough and fast-moving sector. Accelerate@Babraham, the bio-incubator initiative founded and developed at the Babraham Research Campus understands what it’s like for early-career entrepreneurs and their fledgling ventures - many of those involved in delivering the programme have been there themselves, many times. The initiative is also supported by a core group of strategic supporters - AstraZeneca, Eisai, LifeArc, Mundipharma and Kidney Research UK - all keen to understand the business opportunities and provide access to their networks too. The personal experiences of these groups of incredibly skilled life science experts and mentors, combined with access to free lab space, business support, 10K non-dilutive funding and the opportunity to meet investors genuinely interested in funding the science being explored, all whilst experiencing what it’s like to be part of one of the most successful locations for life-science start-ups in Europe, is what sets Accelerate@Babraham apart.

Applications for the 2021/22 Accelerate@Babraham cohort are now open. Just five companies will make it through to the five-month bio-entrepreneurial programme, and each slot will be hotly contested via a rigorous competitive application and pitching process. Only those with the drive, ambition, and tenacity to succeed will secure what is undoubtedly the fast track ‘golden ticket’ for early-stage life science companies.

Dr Karolina Zapadka, Head of the Babraham Accelerator commented: “Further to launching Accelerate@Babraham in 2018, we have supported 15 companies, delivered over 130 bespoke training sessions, facilitated over 330 hours of round-table seminars and discussions and made a multitude of personal introductions to investors and key opinion leaders across the board. The result of which is an alumni which has raised a total investment of £12.5M to date and made connections that will have career-long value.

“What sets Accelerate@Babraham apart is the quality of our network of strategic partners and supporters and the willingness of those world-class scientists, business experts and investors to give their time freely to help us provide a springboard for these early-stage enterprises.

“If you are an early-stage life science start-up with a great idea and want to test your science, this is a once-in-a-lifetime opportunity to do it at one of the best-connected campus communities in Europe.”

So, what’s it really like to take part in Accelerate@Babraham?

We spoke to four of last year’s participants and their mentors to find out.

One of the key themes shining through from the conversations with the 2020 cohort was the benefit of the bespoke mentoring partnerships set up to provide personalised guidance and support.

“I now have a completely different view of how I can move forward, and the business mentoring has helped me to get there,” says Dr Tamsin Holland-Brown, Founder of Paediatric HealthTech and a community paediatrician at Addenbrooke’s hospital, Cambridge. “Having Marco as my programme mentor has been incredible. He has given me a huge amount of one-to-one time and a huge amount of confidence.”

Tamsin was partnered with Marco Cerato, who, at the time, was Senior Vice President Business Development and Strategic Partnerships at Mundipharma. He said: “I admired Tamsin’s drive, the product itself, and the idea that here is a real problem that needs to be managed.

“I have got a lot out of being a programme mentor and there is no doubt that larger companies can learn a lot from the energy, ideas and resilience from these early-career entrepreneurs.”

Tamsin’s venture, Paediatric HealthTech has created affordable bone conduction headphones and an app which, when paired either to a microphone to improve hearing or to a phone or tablet to work on speech and language, results in children with Glue Ear hearing speech more easily.

Tamsin added: “Working alongside Marco has changed the opportunities I have had since we met. He connected me with the Bill and Melinda Gates Foundation, and it looks like we will be able to trial our product in the third world.”

Scientific synergies and the tangible value of mentoring

This sentiment was echoed by the co-founders of Cambridge University spinout Stroma Biosciences, who were mentored by Neil Torbett from PhoreMost: “We’ve had wide-ranging discussions with Neil about how we can take Stroma forward, in conjunction with his past experience with a protein that we’ve considered targeting,” said Co-Founder Dr Eugene Park. “He’s improved our understanding of the nuances of previous programmes attempting to inhibit this target, where potential pitfalls may be and how we could try to mitigate against those.”

Stroma is working on the development of therapeutics targeting stroma-intrinsic mechanisms responsible for environment-mediated drug resistance and immune modulation in cancer and autoimmune disorders.

Their successful mentor/mentee relationship may even lead to a future collaboration between the two companies. “Therapeutic targets is a specialism that I have worked in for quite some time and this is what Stroma is engaging with,” said Neil. “Eugene and I discussed the idea that you could even think about the emerging modalities that PhoreMost is working on, and this is a whole new paradigm of doing drug discovery. I certainly see that as an area we could potentially collaborate on in the future.”

Neil will remain in touch with the Stroma team despite the official mentoring period having now ended: “The whole point about Accelerate@Babraham is that it starts off as a burst of interaction, but it doesn’t stop when the programme stops. I’m always here to continue on the conversation”.

Understanding the financial side if you’re a scientist at heart

The Accelerate@Babraham ventures are assisted by both scientific and business mentors. It’s typically at this early stage where, if start-ups get the financial side right, it can make a massive difference to the success of a company.

ConcR, which is combining multiple different approaches and data sources together into a single holistic approach for modelling tumour progression, was mentored by finance and management consultancy Cambridge Partners.

“When you are starting up a company you can’t possibly know everything that you need to know and do,” says ConcR CTO Matthew Griffiths. “Financial models, legals and appearing credible to investors with a cohesive story used to keep me up at night! Nicholas helped to complete ConcR’s executive level strategy and how that ties into our financial model and the investments that come in.”

Cambridge Partners’ Nicholas Stern said: “Matthew had already built his own financial model and was in a good place, so our role was around refining, supporting, and applying rigor to what was already produced. Investors have a specific way they want to see financial modelling and they have expectations, so we helped to hone ConcR’s model and its structure by challenging Matthew to ensure the assumptions stood up to scrutiny.”

ConcR closed its pre-seed investment round in March this year, supported by the Cambridge Angels, Cambridge Enterprise and US investor, R42 Group. It has also expanded the team and will be announcing a collaboration with a top five pharma company within the next few weeks. 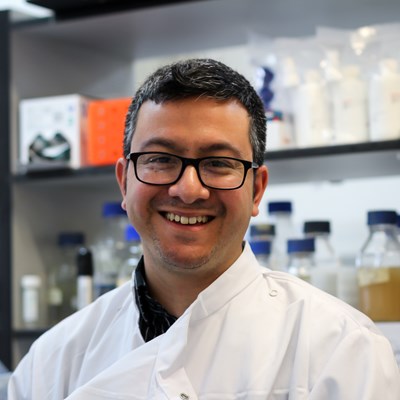 A great example of programme-led alliances was demonstrated between Campus-based PetMedix, an R&D stage veterinary therapeutics biotech company, and start-up ArkVax which is aiming to bring the latest glycoengineering discoveries to veterinary medicine.

Mentor Jolyon Martin felt there was a natural affinity with ArkVax’s work and was glad to be able to talk though a business plan and make introductions to relevant people: “It was refreshing, as it’s very rare that you see start-ups focussed on anything other than human health, for understandable reasons.

“One of the things we spoke about very early on is that yes, there are people that invest in life-science companies and biotech companies, but there aren’t that many investors in the animal health space. So, we were having conversations about educating investors on the opportunity which is quite specific and quite niche.”

ArkVax’s Jon Cuccui said, there are clear, tangible outputs of the time and effort that PetMedix put in: “As a great example of the introductions they made for us, the team linked us with a former Business Development Lead for a major animal health company. He’s now part of our team and has been transformative to our business”.

He added: “We’ve also met potential VCs who have become new mentors and are advising us how to modify our business plan to make it investor ready. Being part of the Babraham Research Campus, where there are so many other successful biotech companies, has added a lot of credence to our offering.”

Accelerate@Babraham wouldn’t exist without the commitment and support of the superb group of strategic supporters, all of whom dedicate time, resource, and funds to ensure the initiative is continually able to evolve and adapt to deliver the very best nurturing support, not only to the current cohort but also the alumni.

Thank you to AstraZeneca, Eisai, Kidney Research UK, LifeArc and Mundipharma for their ongoing support.

Itching to apply? Click here to find out more and start the application process.

Accelerate@Babraham 2021 - together we make it happen. 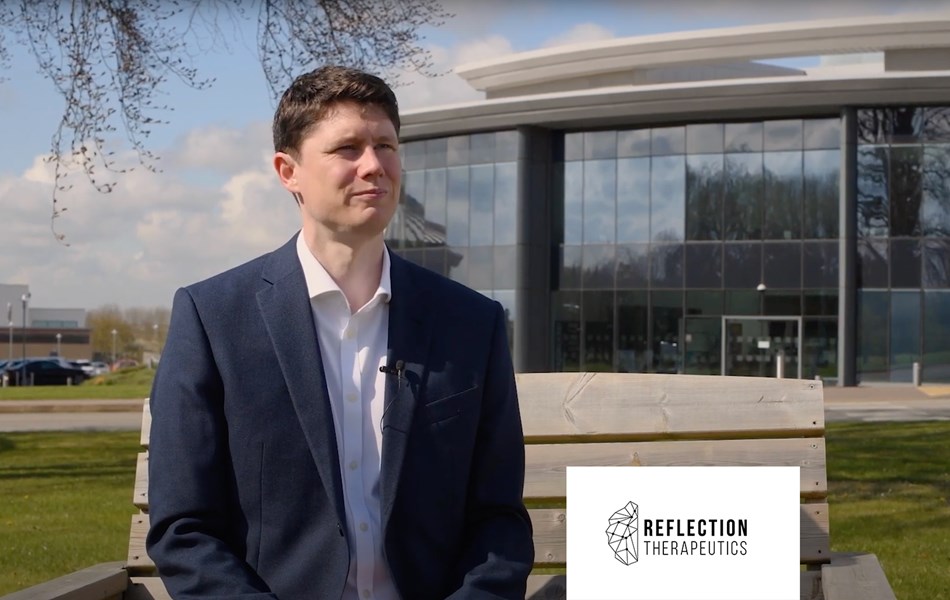 Part of our second cohort (2019/20), Reflection Therapeutics is creating a first in class treatment for motor neurone disease. We spoke to CEO, Tim Newton to understand how both being part of Accelerate@Babraham, and now being permanently located on Campus, has accelerated the company’s development.